Bathroom Safety for Older Adults, or How Squats Can Save Your Life

I just read an article in the New York Times about accidents in the bathroom. According to Centers for Disease Control records, 235,000 adults per year visit an emergency room because of injuries they sustained in the bathroom. 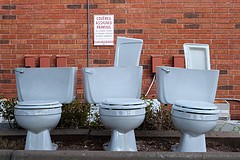 It's not surprising that the rate of injury is much higher in older people, but I was surprised to see the rate of injury skyrocket for people over 75. What really struck me, though, was how many injuries happen not getting in and out of slippery tubs, but simply using the toilet. "People over 85 suffer nearly half their injuries near the toilet." The rate of bathroom injuries was 72 percent higher for women than for men.

What does any of this have to do with fitness? I think everything. If women are losing their balance and falling as they try to sit on or stand up from the toilet, it's in large part because they have lost what little muscle they had when they entered their golden years. Every year after 40 you can expect to lose 1-2% of your muscle mass unless you're actively engaged in resistance training. And those muscles you're losing are the ones you'll need to get off the toilet when you're 80.

You've probably heard the term "functional fitness" used to describe exercise that helps you manage the activities of daily living. Well, getting on and off the toilet is about as functional as it gets. Squats and lunges and ab exercises may seem less than thrilling to you now, but just remember how nice it will be to use the toilet on your own in your 80s.